With Fedora’s release party scheduled for May 12-14, and now Ubuntu planning a release party for 22.04 on May 1, it looks as if next month is going to be party month in the land of Linux. 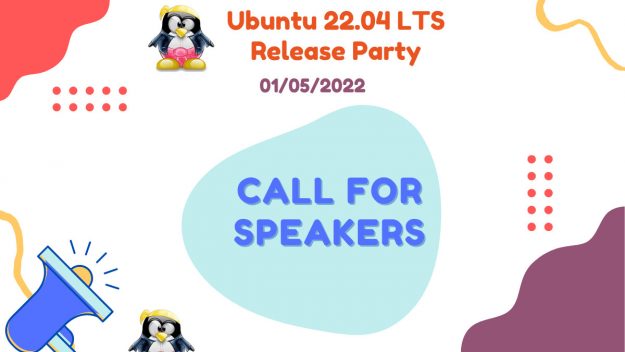 About a week-and-a-half ago we told you about Fedora’s upcoming release party bash to celebrate the release of Fedora 36. Evidently party-animal-with-a-tie Mark Shuttleworth read the news from the Isle of Woman and Man and decided it wasn’t fair for Fedora users to have all the fun, so a decree has come down from on high that Ubuntu’s having a release party too, for Ubuntu 22.04, which ready for prime time in two weeks.

Ubuntu’s release party will come before Fedora’s planned event, on May 1st, or Mayday — which is both the international distress signal and an important holiday for labor union folks. We’re not sure which is pertinent here.

In keeping with the 21st century adage that all events must have a webpage, we looked and yup they do — and it looks like the event organizers used all of next year’s Ubuntu wallpaper budget on the hero image alone, which looks exactly like the hero image on this page, except they used some secret Ubuntu magic sauce so that on their page the image kinda jumps out at you when you roll your cursor over it. That scared the bejeezus out of Ms Clemens, who divides her time between being our office manager and making sure our favorite online solitaire game continues to work well on Linux Mint, which as far as we know isn’t having a release party.

So, what’s the itinerary for this for this swell event that Shuttleworth and his gang of wild and crazy friends has planned?

That seems to be a problem. They know what they want to do, they just haven’t (with less than a month until the bash comes out of its shell to go live) found the people to do it.

The plans are to make this a Linux nerd version of an Owsley and the Family Dog 1967 era electric Kool-Aid acid test party, just without the drugs, music, close personal contact, Kool-Aid, or tests.

“The event will aim to give participants all the knowledge they need to explore and set in motion the powerful features in Ubuntu and related technologies like, System Administration, DevOps, Security, Cloud and Development,” the event organizers said in a statement. “Submissions are welcome on any aspects of developing, using, customizing, or deploying Ubuntu.”

Trouble is, Mark (we’re not really on a first name basis, but we like to pretend we are) hasn’t found anybody to teach any of these things, likely because he’s been following Elon Musk and Richard Branson around begging for a seat on the next touristy launch since he has some frequent launcher miles from the Russians that he’s sure are transferable, although there might be a delay in that because it appears the Russians are otherwise occupied right now.

With only three weeks to party time, and nary a speaker on the roster, Shuttleworth is doing what every other high dollar, open source, over the top level business executive does in such a situation: he told a staff member to put out a call for speakers, which she has done.

Wow! That’s perfect. Other than some inconsistencies in the use of capitals, this is exactly the kind of high quality thinking I would expect from a high class outfit like Ubuntu!

If you’re thinking that you too would like to be a speaker at a world class online gala event such as this, but aren’t sure if your experience distro hopping through all the Debian derived distros will be enough to make you a qualified expert on anything, the folks at Ubuntu have come up with a list of what they’d like to cover: Ubuntu in small and medium businesses, Ubuntu in education, Linux & Open Source, system administration, DevSecOps, development, machine learning, and, career path.

If this sounds like you, Shuttleworth’s people advise: “Please please fill out this form and tell us a little bit about yourself and your topic. We eagerly await your responses and look forward to sharing the day with you and hearing your insightful speech. The team will screen the proposals and will contact you via email or phone.”

Remember kids, just because you think you’re good enough doesn’t mean you are good enough, and if you aren’t, well, too bad for you.

“Please note that the submission of a completed proposal form does not in any way guarantee the submitter or presenters a speaking slot on the event,” the Ubuntu folks said with a patronizing smile.

Published in Events and News