POSSCON has been cancelled. The surprise announcement was made Thursday by way of an email from IT-oLogy, the nonprofit organization which hosts the event. The conference, which focuses on the enterprise and is targeted at IT professionals who develop or use open source software, was scheduled to be held in Columbia, S.C. on April 12-13.

This is the second time in three years that IT-oLogy’s longest running conference has been cancelled. In 2014 the event was cancelled, evidently due to logistical problems as IT-oLogy was in the process of launching the first Great Wide Open conference in Atlanta. Last year there was no Atlanta event, and POSSCON was successfully rebooted in Columbia, attracting around 850 atendees. 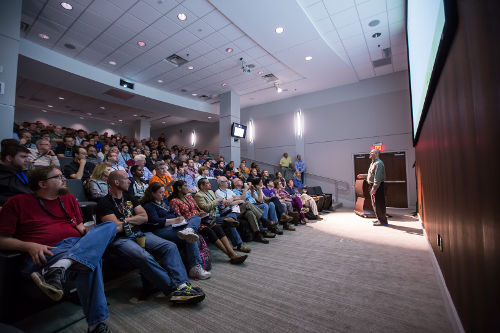 Last week in Columbia, South Carolina, the developers’ conference POSSCON went through something of a reboot. Last year the conference was cancelled to allow It-oLogy, the organization behind the event, to put its energy behind launching the Great Wide Open conference in Atlanta. This year, with last year’s successful premiere of the Hotlanta event under its belt, IT-oLogy pulled-out all the stops to reestablish POSSCON.

Putting a popular conference on hold for a year could easily have proved to be a big mistake, especially since POSSCON takes place in IT-oLogy’s hometown. Not to fear, however, as the crowds returned, like the swallows to Capistrano, to Columbia’s Vista district where the conference is held.

Columbia, South Carolina’s Posscon conference is still a couple of weeks away and already nearly sold out. We’re hearing from the conference organizers that anyone planning on attending who hasn’t gotten tickets yet should take care of that pronto, before it’s too late.

Posscon, primarily a developers’ conference, has a few talks on the schedule which might fly beneath the radar for the hardcore coders and developers who make up the lion’s share of those in attendance. Here’s five that catch my interest and which would be on my dance ticket if I was able to make the event:

After taking a year off so that IT-oLogy, the nonprofit behind the event, could concentrate on launching the Great Wide Open conference in Atlanta, the POSSCON developers’ conference will return to Columbia, South Carolina on Tuesday and Wednesday, April 14th and 15th. Last year, regular attendees of POSSCON were urged to attend the Atlanta event instead. This year’s event will take place at various venues in the Vista, Columbia’s arts and entertainment district.

END_OF_DOCUMENT_TOKEN_TO_BE_REPLACED
Organizer Confirms Both POSSCON and ‘Great Wide Open’ in 2015