Why Gnome 2 Continues to Win the Desktop Popularity Contest

Eight years after the Gnome 2 desktop was replaced by Gnome 3, the older desktop environment remains one of the most used interfaces on desktop Linux. 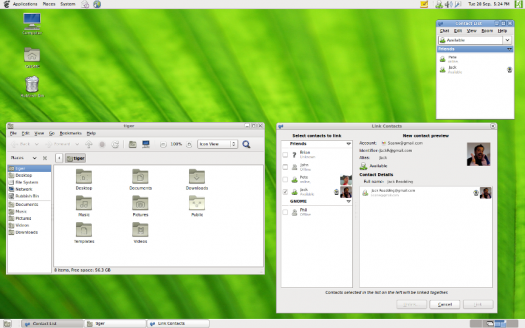 Gnome 2.0 was first released on June 26, 2002. Seventeen years and a couple of reincarnations later, it remains one of the most popular and longest-lived desktop environments for Linux.

A handful of window managers, like IceWM and Ratpoison, are older than Gnome, but are less widely used. Similarly, Trinity, the successor fork to KDE 3, is a year younger and used by a few aficionados. Gnome 2, though, has a recognizable descendants in Gnome 3’s fallback mode, extensions through which it can be closely duplicated, and in Linux Mint’s Mate, which began as a fork of Gnome 2’s last release.

Exactly how many use one of these descendants has never been tallied, but the total is likely enough to place them as a group among the half dozen leading desktop environments today. Looking at this continued popularity, I have to wonder why, and the possible answers suggest what a majority of users look for in a desktop environment.

Even in 2002 Gnome 2 had little that was original. It offered a standard interface, with a desktop, panel, and menu, like the one that Windows 95 had introduced seven years earlier. Today, as with other major DEs, Gnome 2’s interface is obsolete. Its menu is particularly poorly suited to the massive content of modern storage devices, requiring endless clicks that are only tolerable because users have adjusted to them gradually.

The most praise that could be given Gnome 2 is that, along with KDE 3, it marked the point where desktop environments for Linux achieved a rough parity with their proprietary equivalents. Although new releases would come out every few months or so for the next decade, the basic functionality remain unchanged. In the next major release, Gnome would have no where to go except in a new direction.

Perhaps that lack of originality is exactly what makes Gnome 2 so long-lived. “Intuitive” is a carelessly and over-used word when interfaces are discussed, but as far as it has any meaning, it refers to a design that is familiar. In that sense, Gnome 2 and its survivors are intuitive. The fact that Gnome has always tended towards a minimalist design philosophy makes it even more intuitive. What that means is that if you used most versions of Windows over the last couple of decades, you can adjust to Gnome 2 and its survivors in a few minutes. It will be familiar and unsurprising — and a considerable aid to those trying Linux for the first time.

In fact, the familiarity is so great that there are videos on Youtube explaining how to make both Gnome 3 and MATE look like different versions of Windows (or the other way around). The resemblance is not perfect, yet the fact it can be done at all emphasizes how similar Gnome2-like DEs are to Windows.

What I Really, Really Want

However, that seems to be only part of the reason for Gnome’s continued popularity. After all, the same familiarity is also found in Cinnamon, KDE, LXDE, and Xfce. I suspect that an even more important reason for Gnome 2’s popularity is that it refelects what modern users look for in a DE.

As far as they are able, most DEs tend to develop an ecosystem of applications and utilities. In the case of Xfce, that ecosystem is limited, but in most popular ecosystems, such as Gnome and KDE, the ecosystem consists of hundreds of pieces of software. The size of the ecosystem may add to the familiarity of a popular DE like Gnome 2, allowing users to quickly learn applications as well as the desktop.

Around the turn of the millennium, DEs only offered their own ecosystem. In addition, they offered different ways of working. For instance, during the first general release of Gnome, its developers were officially working towards a Gnome Office. They got as far as AbiWord and Gnumeric, but around the time that Gnome 2 was first released, the release of Sun’s OpenOffice.org (the precursor to Apache OpenOffice and LibreOffice) meant that Gnome Office no longer served a purpose, especially when so many other pieces of functionality were needed.

KDE’s ecosystem continues to include customizations, such as hot spots and Activities. Gnome 3 also defaults to a different layout, with applications launched in the overview and used on the main stream. However, in Gnome 2 the emphasis is not on the customization of the workflow. Instead, once files and applications are selected, Gnome 2 recedes into the background. As you work, the fact that you are working in Gnome 2 is of no importance. It is basically an application launcher and only comes to the forefront when you log in or out, or launch another application. It does not determine how you work the way the Gnome 3 overview or a KDE Activity does.

Considering the user revolt when Gnome 2 was replaced, or even the hostile reception of KDE 4, I suspect that Gnome 2-like DEs remain popular because a launcher is all that a sizable number of users want. Not all users, certainly, want the same thing. About a third of Linux desktop users favor KDE. However, perhaps as many just want a launcher. If so, they find exactly what they want in Gnome and its survivors. Moreover, because of Gnome’s size and decades of development, they can also have the ecosystem that DEs like LXDE and Xfce lack.

The Linux desktop only recently recovered from the fallout of the Gnome and KDE user revolts, and the idea of developing a future desktop is perhaps less urgent or exciting in today’s world of cloud applications than in days past. Still, the next time desktop developers decide on major innovations, they might look at how Gnome 2 persists and concentrate on simply providing a launcher. After all, that is all many users seem to want.