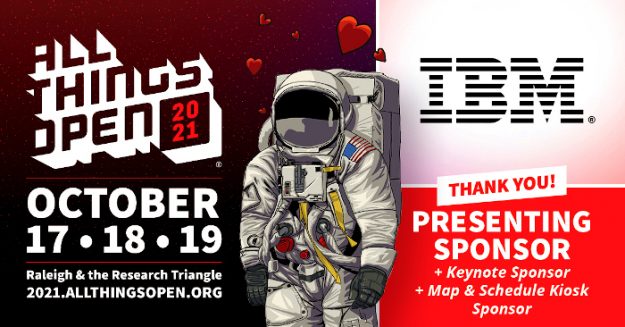 One of the announcements made at this year’s All Things Open conference in Raleigh came on Monday when IBM unveiled an Open Source Cloud Guide, which offers a vendor and cloud agnostic view of open source developer tools.

“The Open Source Cloud Guide, which highlights various use cases that are important in hybrid cloud environments, features the important open source projects in those areas and discusses how various clouds are using open source in their offerings,” Ferris and Todd Moore, IBM’s VP of open tech, wrote in a blog that was released on the same day. “By open sourcing the guide, developers are able to both use and contribute to the learnings and use cases.”

IBM plans for the guide to be an ongoing open source community resource and is asking developers to contribute to the project.

IBM, along with Red Hat which was also present at the unveiling, has long been advising enterprises to take a hybrid cloud approach, and says the new guide grew out of information gleaned from an O’Reilly survey, The Value of Open Source in the Cloud Era, that IBM commissioned in late 2020. One of the findings of the survey was that developers are better served by honing open-source skills rather than concentrating on developing skills for proprietary cloud offerings.

“Because every major cloud platform uses open source software in their infrastructure,” Ferris and Moore wrote, “developing skills related to open technology makes developers more desirable to potential employers and helps developers compete in hybrid environments — that is, those that provide the ability and flexibility of running parts or all of your cloud solution and services on-premises and/or on a public cloud, and/or in multiple clouds.”

Currently the guide is divided into four technical areas (artificial intelligence, APIs, big data, and containers), although IBM indicates it expects more areas to be added later. For each use case, the guide offers an overview, explanation of a traditional solution for the use case, key open source projects, and highlights on how cloud providers are using open source to address the use case. For developers wanting to contribute to the project, IBM has established a GitHub page with contribution guidelines.

“Developers, we hope you will both use and contribute to our open-source guide,” Ferris and Moore added. “Let us know what open source projects you think should be included. Add more use cases. Tell us what open source your favorite cloud platform uses in their implementation.”

More from CloudMore posts in Cloud »