Nextcloud Announces a New Backup Application for Its Home Users

Germany-based Nextcloud is releasing an easy-to-use backup application for its productivity and collaboration platform that’s designed not for the big enterprise customers who pay its bills, but for home users and small business who generally use the product for free.

Announced today was Nextcloud Backup, a fully encrypted incremental backup solution that’s not only easy-to-use, but which offers a full set of features that includes a wide choice of backup options (including one that might surprise some folks) and the ability to search through a backup to find individual files and folders when a full restore isn’t needed.

Nextcloud said that the software is aimed squarely at home users, along with small mom and pop sized businesses, which are unlikely to ever become paying customers, except for some who might pay a small amount for a hosted version.

“Enterprises use powerful but complex backup solutions to provide them with the data safety and security they need for Nextcloud,” Maxence Lange, the Nextcloud software engineer who’s the Backup app’s lead developer, said in a statement. “For private users, such solutions are often overkill. Our new backup app provides an incredibly easy way to ensure that even in the worst case like total loss of a server, data is secure on the instance of a friend or family member, while of course preserving privacy through encryption.”

This focus on small users isn’t the norm in enterprise open source. Most commercial open source vendors bend over backwards to cater to the requirements of big enterprise clients who keep their doors open, while leaving most home users and small businesses largely on their own.

This is especially true when it comes to features designed to meet the needs of home users, which are often quite different than the needs of enterprises that demand scale. While open source enterprise developers and vendors are happy to have nonpaying users (often called “hobbyists” or “enthusiasts”) along for the ride, and often point to them as proof of their good open source stewardship, their software is generally designed to meet the needs of enterprises running hundreds or thousands of servers and with plenty IT staff on hand to keep complex infrastructures maintained.

The Nextcloud platform, which began as a FOSS fork of open core ownCloud in 2016, started as a self-hosted file-sharing platform with capabilities similar to Dropbox. Since then, the project has grown to be a full featured private cloud that has collaboration capabilities similar to the proprietary employee portals that have become commonplace in the corporate world. Because it’s free, and easy to install and use, it’s become popular as a roll-your-own portal for enterprises and governments.

How popular is it?

Consider this: in 2018 the German federal government chose the homegrown platform as the collaboration and file-sharing platform for more than 300,000 government users. Since then, the German government has doubled down on this commitment. In April it was announced that the federal government’s Ministry of Education and Research had funded the development of a health care application to use with Nextcloud, focused on data privacy.

The platform has also become popular with tech savvy consumers, who can afford to use the platform because Nextcloud offers it without cost. There is no watered down “Community,” or feature rich “Enterprise” versions, which is something of a norm these day among open source companies. With Nextcloud, enterprises pay for things like support, integration, migration, and often hosting. The software is always free.

Backups for the Non-Geek

Beside being focused on users who typically aren’t customers, there’s another big oddity to Nextcloud’s new Backup app: users can select a Nextcloud instance being run by a friend or family member as a backup location, even if that other instance doesn’t have the Backup app installed.

Also, if that friend or family member turns out not to be as trustworthy as the user thought, the backup will still be secure; only the person initiating the backup has the encryption key. While this might be a little less than ideal in some cases, it beats losing data after something like a catastrophic hardware failure because of the lack of a backup.

According to Nextcloud, although more conventional backup locations are also available — such as a directory on the user’s hard drive or USB drive, FTP, samba, or any external storage supported by Nextcloud — the app was specifically designed “to secure user data on the Nextcloud instance of another user” as a priority. 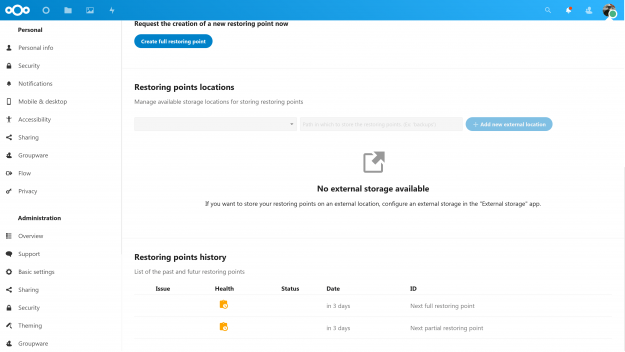 “The Nextcloud Backup app was designed to fill the gap of backing up the data on a private Nextcloud instance run by a less technical user,” Nextcloud said in a statement. “Many users forego backups due to the complexity involved. Yet, data loss can happen, especially in case of hardware issues with instances run on cheap platforms like a Raspberry Pi, or an old notebook or desktop at home. With several hundreds of thousands of Nextcloud instances on the internet, many users are at risk of data loss.”

The new app backs up the entire Nextcloud instance, including configurations and apps (along with the apps data). Not backed up are non-local data sources, such as remote files and external storage.

Users can configure Backup to run automatically from Nextcloud’s Admin Settings Page. Nextcloud said that the backup runs quietly in the background, but “with a very short downtime” when the system goes into maintenance mode to make a snapshot.

“The snapshot is then compressed, split in 100MB parts, and encrypted, a process which happens in the background and does not require maintenance mode,” Nextcloud said. “These are then stored on the designated backup system, be it local or remote. Folders can be excluded from backup by adding a .nobackup file in the folder.” 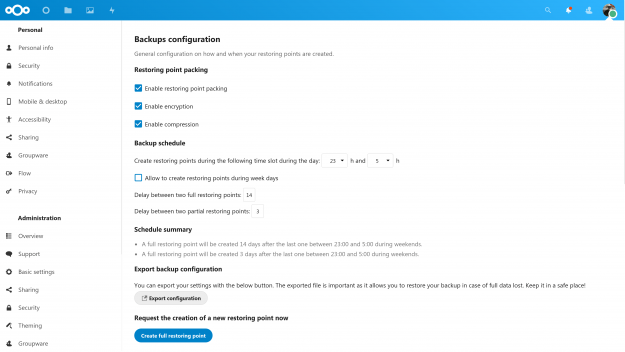 Recovery is equally as easy. Any user with admin privileges can restore single files or initiate a full backup through the command line.

“When an instance is entirely lost, some information including an encryption key will be needed to restore the data,” the company said. “This key can be copied from the Admin interface or the command line and should be stored in a different location.”

Today’s release is a beta version of the Backup app for Nextcloud 23 beta 1, with a stable, ready-for-prime-time release expected with the upcoming Nextcloud 23 release, which a Nextcloud spokesperson told us should happen within the next two months.

In the meantime, Nextcloud has published a blog with instructions for testing the app for users users who want to kick the tires on the beta version, or take it out for a test drive.

Published in Cloud and Software