OpenSUSE is Looking for Candidates to Run for Its Board

Two seats on the board at openSUSE are up for grabs. Candidates will be announced on November 22, and voting begins on December 13. 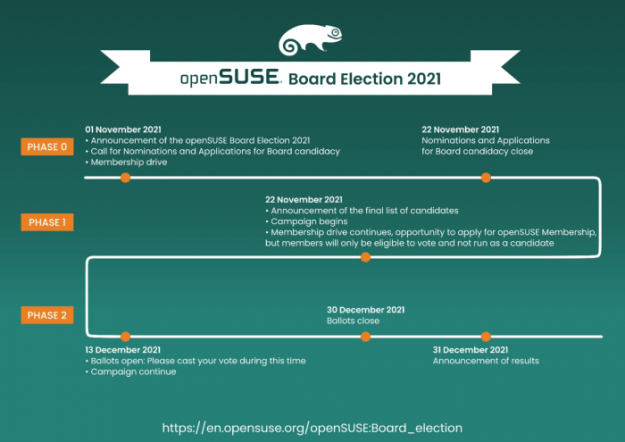 There’s not likely to be anything sexy, like televised debates or nation state cracker hackers attempting to steal emails to influence the outcome, but the openSUSE Project is going to have a board election and they’re looking for a few good candidates to step up to the plate.

OpenSUSE’s flagship distro (or at least the distro they’ve had the longest) is the community-focused openSUSE Tumbleweed, which might be seen as having the same relationship with SUSE Linux Enterprise as Fedora has with Red Hat Enterprise Linux — as each carries the genes of its parent distro, but other than that is sorta completely different. There’s also not much similarity between Tumbleweed and Fedora, other than the fact that they’re both have all the ingredients necessary for a GNU/Linux distribution.

Leap, the organization’s other distro, is also sorta completely different from Tumbleweed, as it’s pretty much an exact copy (“binary compatible” the folks at SUSE call it) of SUSE’s bread and butter SLE. Continuing with our Red Hat analogy, this makes Tumbleweed akin to CentOS Linux in its traditional (but now dying) role of being a drop-in replacement for RHEL.

In other words, Tumbleweed is like Fedora insofar as its a cutting edge distribution with all the latest and greatest of everything (but also different, as it’s a rolling release and Fedora isn’t), while Leap is primarily for those who’d like to be using SLES or SLED, but don’t want to shell out the bucks for it, just like CentOS used to be for RHEL.

Thoroughly confused? Good. Now we can move to the next section in this article.

Like all other software projects that are more than two guys in a basement trying to get their computer to echo “Hello world” on queue, openSUSE has a board of directors to oversee operations, dodge bullets, come up with great ideas, figure out who to blame for mistakes, and the like. Also like most organizations, openSUSE elects its board from among its members — that is people who are at least willing to write a check every year to help the organization keep its bills paid.

For the upcoming election there are two seats open, which means, “The openSUSE Project is seeking nominations and applications for openSUSE Board candidacy.”

Oh, in addition, “The project also looks to gain more members leading up to the elections,” Not because they want to stuff the ballot box or anything, but because…well, checks to pay expenses.

According to openSUSE, there will be three phases to the election. The first phase, which started on November 1, is numbered “zero,” because software engineers are suspicious of any list that starts with a “one.”

“Phase 0, which is the current phase, announces the election schedule, seeks candidates to run for the board and has [a] membership drive for people who want to become members of the project,” Douglas DeMaio, a Manager for the openSUSE project, wrote in a blog about the board election. “Phase 1 continues with the membership drive to gain new members, and declared candidates, who will be announced in this phase, can begin campaigning. Moving to the final Phase 2, members can begin casting votes for the candidates while the candidates can continue to campaign for votes. Phase 2 is scheduled to begin on Dec. 13 and the results are expected on the last day of 2021.”

While this doesn’t quite make it clear when Phase 1 (you know, the second phase on the list when the candidates are announced and everything really get going) starts, the nifty graphic that I pinched from openSUSE, which should be at the top of this page, indicates that would be on November 22.

Wanna run (or vote)? openSUSE has a web page set up with all the details for you to read.

In the meantime, I’m really hoping the folks at openSUSE have a sense of humor. This is serious business. I hope the organization elects a couple of really good people.