The recipes that Carla Shroder shares here only begin to scratch the surface of what’s to be found in the Second Edition of her classic guide to Linux. If it was up to us, however, we would have called it “The Joy of Linux”, after our favorite all-purpose cookbook. 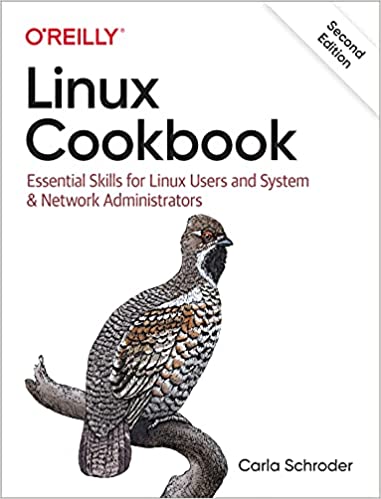 In Why I Wrote the Linux Cookbook, 2nd Edition, I discussed how much Linux has changed in a short time, and how I updated the Linux Cookbook to include some of these changes. Now I will share some snippets from the new book, so you can get a taste of how fabulous it is, and inspire you to dash out and buy many copies.

Or not, at any rate let the snippets commence.

I adore SystemRescue, the excellent bootable rescue Linux designed for rescuing damaged systems. You can use most any live Linux for rescue operations, but I like SystemRescue for its default bundle of useful applications, and it is light on CPU and memory.

You lost your Windows password, and you don’t want to jump through the usual Windows hoops to reset it.

Examine the information on the user you want to change:

Press q to quit, and y to “write hive files,” which saves your changes.

Are You Using systemd or Not?

I like systemd, but some users still prefer the old SysV init. The excellent MX Linux provides both, and you choose the init you want to use at boot time. This recipe tells how to find out if your system is running systemd.

4.1 Learning if Your Linux Uses systemd

You need to know if your Linux distribution uses systemd or something else.

Look for the /run/systemd/system/ directory. If this exists, then your init system is systemd.

The /run/systemd/ directory may be present on your system if your distribution supports multiple init systems. But systemd is not the active init unless you see /run/systemd/system/.

There are several other ways to learn which init system your system is using. Try querying /sbin/init. Originally this was the SysV executable, and now most Linux distributions preserve the name and symlink it to the systemd executable. This example confirms that the init is systemd:

On a system using SysV init, it has no symlink:

The /proc pseudo-filesystem is an interface to your Linux kernel, and contains the current state of a running system. It is called a pseudo-filesystem because it exists only in memory and not on disk. In this example, /proc/1/exe is symlinked to the systemd executable:

On a SysV system, it links to init:

On a SysV system, it reports init:

The command attached to process ID (PID) 1 is your init. PID 1 is the first process launched at startup, which then starts all other processes. You can see this with the ps command:

When the init is SysV, it looks like this:

Some popular distributions that do not support systemd, or include it but not as the default init, are Slackware, PCLinuxOS, Gentoo Linux, MX Linux, and antiX.

Distrowatch for information on hundreds of Linux distributions

The Best Way to Save a Web Page

Let’s do one more. Did you know you can save files from any source, even web pages, by using your CUPS printer dialogue to export them to PDF?

15.10 Saving Documents by Printing to a PDF File

You want to save a web page, or any document, to a PDF file instead of sending it to a printer.

Look at the File → Print dialog in any application, and you will see an option to print to a PDF file (Figure 15-14).

You have all the usual options, such as filename and location, margins, print quality, color or monochrome, and page orientation. The printer dialogs look different in different apps; for example, the Firefox web browser printer dialog includes a document preview. In other apps the preview is usually a separate button.

Print to file is great for saving web confirmation forms and receipts, and creating PDFs from any type of documents.