Although Richard Stallman seemed to be absent from this year’s LibrePlanet event, the Free Software Foundation has announced he will be livestreaming his “The State of the Free Software Movement” talk on April 13th at 2 p.m. Eastern Time. 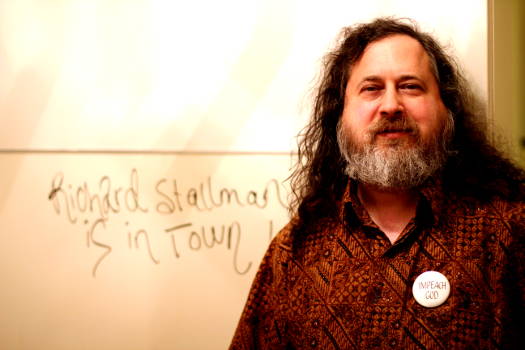 Just because Richard Stallman seems to have been left out of this year’s LibrePlanet, the Free Software Foundation’s annual “free software” lovefest, doesn’t mean he’s dropping out of public view. It also doesn’t mean that the FSF isn’t willing to let him speak under its banner.

In fact, Stallman is scheduled to deliver an FSF sponsored free online talk on “The State of the Free Software Movement,” which is pretty much the subject he’s traditionally covered every year at LibraPlanet since its beginning, on April 13.

If this surprises you, it shouldn’t, despite his recent difficulties. He is, after all, an FSF board member and remains the name most closely associated with the organization.

He also continues to have plenty of supporters, who continue to see him as something of the once-and-future-king of the free software movement he created in the 1980s, which more than a decade later gave birth to open source software as we know it today — which means that as much as his detractors may dislike it, he remains a spokesperson for many free software and FOSS advocates.

The standalone talk, which is scheduled to last for two hours, will come about 2 1/2 years after Stallman stepped down as president of the FSF, an organization he founded in 1985, under pressure because of comments he’d made in the wake of the Jeffrey Epstein sex trafficking scandal (although calls for his resignation had begun several years previously). At the same time, he left his role as a “visiting scientist” at MIT, although he continues to head the GNU Project, which he also started.

During a talk at last year’s LibrePlanet, Stallman again generated controversy when he announced that he was officially back onboard at FSF as a member of the organizations board of directors — which angered detractors but pleased supporters, some of whom expressed hopes that this was an on-ramp to his eventual return to FSF’s presidency.

On its website, FSF says of this year’s “State of Free Software” talk that, “Richard Stallman will be speaking about the free software movement and your freedom. His speech will be nontechnical, admission is gratis, and the public is encouraged to attend online.”

The talk will be livestreamed on April 13, 2022 beginning at 2 p.m. Eastern Time. The FSF says that a link to the video will be available on the webpage announcing the event.

Published in Community, Events and News