Looking for Open Source Code Repositories? The French Government Has Your Back

Looking for Open Source Code Repositories? The French Government Has Your Back

The EU and many of its member states are highly supportive of open source software. France takes that to new levels. 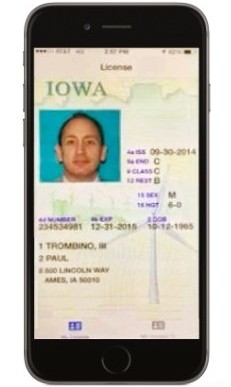 Iowa has come up with a plan which I’m adding to my “bad idea” list — driver’s license by phone app.

It seems that beginning next year, which is now less than three weeks away, the good and cold state will be experimenting with issuing driver’s licenses as mobile apps rather than the old fashioned plastic kind that are best kept in a wallet. According to CNN, the app will be legal identification and will be secured by use of a PIN number. The app can also be secured using fingerprint or facial recognition technology said Andrea Henry with the Iowa Department of Transportation.

The program is being pushed as an option of convenience. Iowa drivers can choose the app, an “old fashioned” plastic license or both.

“Really, it’s about giving customers a choice,” says Henry. “We’re in an increasingly mobile world, and there are so many things that are connected to your mobile phone.”

WHO TV in Des Moines reported that one security feature of the app license is that the driver’s face will be constantly in motion, rotating from side to side.

“It shows you it is real,” explained Iowa Department of Transportation’s Director, Paul Trombino. “It gives you a real perspective. There’s a lot of ways for us to offer security features which I’m not going to prescribe today so that, we know it’s the person.”

Although this may sound way cool to the folks who see being tethered to expensive data plans as a privilege to be savored, to me it smacks of Big Brother and 1984.