Posts tagged as “internet of things”

Cayenne: IoT Made Easy for the Raspberry Pi

Cayenne: IoT Made Easy for the Raspberry Pi 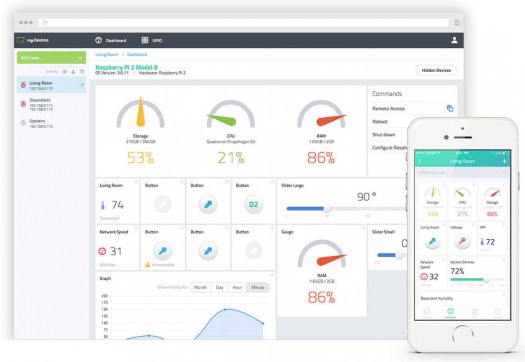 If you want to add ‘Internet of Things’ functions to your home, you can now do so with relative ease using Raspberry Pi and Cayenne, an easy-to-use online service.

As the Internet of Things gets bigger and bigger, some of you may be wondering how you can get started with IoT without having to purchase an expensive setup. Companies such as Nest and Wink are great for automating your home, but who wants to spend a lot of money only to realize that home automation isn’t for you? This is where the Raspberry Pi can be a great tool for figuring out if the IoT world is right for you. But even if you own a Raspberry Pi and are tech-savvy, getting started in the IoT realm can be quite daunting, which is where Cayenne comes into the picture.

END_OF_DOCUMENT_TOKEN_TO_BE_REPLACED

The day has changed, but the commentary remains the same: In a minor FOSS Force shuffle, I’ve moved from giving commentary on Wednesdays to giving it on Mondays. And while there is no one item that stands out in a grand way to start the week, there’s no reason we can’t begin the week with several smaller items, right?

LibreOffice has won, get over it: Last week, I innocently posted an article on Facebook about LibreOffice’s fifth birthday — yes, it has been five years, surprisingly — and for some reason it ran into some resistance from one friend who isn’t exactly too fond of the name “LibreOffice” — “Libre isn’t English” (huh?) — and he seems to think that the remnants of OpenOffice are better served if the LibreOffice folks just fold up their tent and rejoin OpenOffice. Yeah, I laughed too. That’s not going to happen because, for all intents and purposes, OpenOffice was fatally poisoned as soon as Oracle got a hold of it, making the LibreOffice fork necessary. If anything, OpenOffice developers should drop OpenOffice and join LibreOffice. Anyway, happy 5th, LibreOffice.

Columbia, South Carolina’s Posscon conference is still a couple of weeks away and already nearly sold out. We’re hearing from the conference organizers that anyone planning on attending who hasn’t gotten tickets yet should take care of that pronto, before it’s too late.

Posscon, primarily a developers’ conference, has a few talks on the schedule which might fly beneath the radar for the hardcore coders and developers who make up the lion’s share of those in attendance. Here’s five that catch my interest and which would be on my dance ticket if I was able to make the event:

One of the most discussed items of the week, arriving with much fanfare, comes from our friends at Canonical/Ubuntu, who brought you Ubuntu TV and Ubuntu Edge — oh wait, they said they’d bring them but never actually delivered — and who now wants to be the operating system behind the nebulously termed “Internet of Things.”

Steven J. Vaughan-Nichols starts with a mea culpa in his ZDNet article for assuming that Ubuntu Core — Canonical’s entry in the Internet of Things operating systems — was “a pure server play.” The article, of course, outlines the plan, with details provided by Mark Shuttleworth himself. It’s definitely worth a read.