Hook one of these BLE babies up with facial recognition technology and we’ll be living smack dab in the middle of a Philip K. Dick novel.

Do you spend a lot of time thinking about Bluetooth Low Energy (BLE) beacons? Unless you run a retail store, probably not. But if you do run a store (or stores) along with an e-commerce operation, BLE is a hot new thing you are either using already or thinking about using before long.

END_OF_DOCUMENT_TOKEN_TO_BE_REPLACED

What Hardware Platforms Do You Use? All of Them.

The results of our hardware platform poll have been tallied and just as we suspected, FOSS Force readers in large part use every platform available. The poll, which asked what different hardware platforms you use, offered a slate of answers too long to list here. Let’s just say it covered the gamut, from smartphones to desktops, and included separate places to tic for different operating systems.

END_OF_DOCUMENT_TOKEN_TO_BE_REPLACED

What Computer Platforms Do You Use?

When Star Trek first hit the air back in the “swinging sixties,” that’d be the 1960s for those too young to remember, many of the technically minded took one look and said, “Impossible.” Or if not impossible, it’d be at least the 23rd century, the era in which the show was set, for the technology to arrive. They weren’t talking just the space travel science, stuff like warp drive, inertial dampers and the like, but were talking the small stuff too, like the communicators and tricorders. Today we have something akin to both, built into a single device called a smartphone. In hindsight, we should’ve seen it coming, but as some folks say, hindsight has perfect vision.
END_OF_DOCUMENT_TOKEN_TO_BE_REPLACED
Linux: When Uniformity is Good 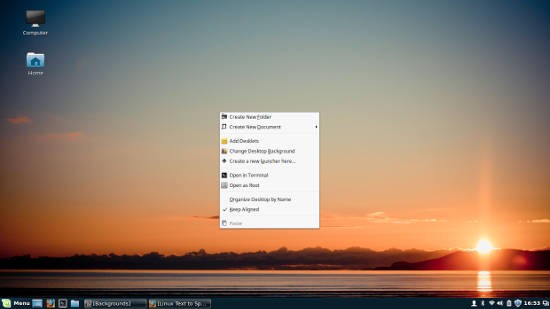 Linux: When Uniformity is Good

We’ve been in this bid’ness for ten years now. The business of giving Linux-powered computers to kids who cannot afford this technology, or any technology for that matter. And so far so good. There have been some lessons learned along the way. Some of those lessons small but valuable. Some of those lessons so painful that we had no choice but to change the way we do things. And never doubt…there were uh, spirited discussions about this change. Yeah, we’ll stick to “spirited”. I’ve been to football matches in Great Britain and Germany that couldn’t come close to such levels of “spirit.” So which thing could bring about this measure of “spirited” discussion? These environments all have their strengths and their weaknesses, just like any number of things you might put up for comparison. But this business of desktop environments, well…there are a lot of moving parts here. A lot of things to consider, and most importantly, the mechanics that lead us to our decision to use one environment over the other.

Larry’s hanging out up near the 49th parallel, in Bellingham, Washington, for the LinuxFest Northwest conference. He’ll be filing reports over the weekend and possibly on Monday, so stay tuned. Meanwhile, I get to do the Week in Review — because the boss likes me best.

Speaking of conferences, OSCON’s making a big move. Although the annual conference presented by publisher O’Reilly Media started in my old stomping grounds of Monterey, California in 1999, the event has been held in Portland, Oregon every year since 2003, except for 2009 when it made a one-off stop in San Jose. This year OSCON will once again be held in Portland, on July 20-24, then that’s it, for at least a year.

Late last week, Rachel Roumeliotis reported in a blog on the OSCON website that after this year’s event, the conference will be packing up and making a move. In 2016, OSCON will unfold it’s tents in Austin, Texas, with the conference being held May 16=20.

Why Austin? Cited for reasons are the city’s many software communities, such as All Girl Hack Night and Google Development Group Austin, as well as Texas based tech firms such as Rackspace, Dell, SoftLayer, Continuum, and OpenStack. It doesn’t look like this move will be permanent, however. According to the post: “As with OSCON in Amsterdam…we want to explore these communities and offer those software engineers and architects the OSCON experience.”