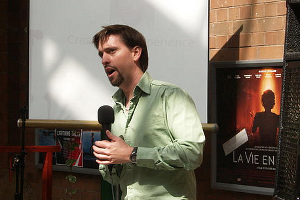 Flamethrowers and a kumbaya that will probably never happen: Yep, that’s the kind of week it was this week in the land of free/open source software.

Wearing your fireproof underwear? KDE’s Aaron Seigo – never one to shy away from saying what he thinks – lit into community managers in a Google+ post on Monday, calling the community manager role in free/open source software projects “a fraud and a farce.”

END_OF_DOCUMENT_TOKEN_TO_BE_REPLACED

What a Layperson Can Gain From an Enterprise Open Source Conference

Here at FOSS Force we’re very proud to be an official media partner for the Great Wide Open conference that’ll be held in Atlanta next week. Because this is an enterprise conference, I don’t think I need to explain to those who work in IT the benefits of attending such an event. However, those of you who are primarily home users may think there’s nothing for you at a conference focused on professionals.

Any open source user, whether a professional or not, will benefit from attending an enterprise conference. Remember, the user is considered just as important to any open source project as those who develop and distribute the product. In other words, an enterprise conference is just as much about the user as the developer — even if the user is never likely to call Red Hat on the phone to order service contracts for the RHEL stack on a hundred servers.

Here are just a few reasons for a living room Linux user to attend an enterprise conference such as Great Wide Open:

You have probably installed Linux on your work laptop and impress your colleagues with the style and performance of your operating systems. You promote Linux! Lucky you! I am envious!

Unlike you, I do not have this opportunity. Neither do many other office workers. That is because medium and large companies have their own policies about the software allowed to be used on their computers. More often than not, the choice of operating systems is Microsoft Windows, unfortunately. That can be because of some specific software required for business or because of management’s numbness. However, that’s not the point of this article.

DarkDuck is the author and the owner of the blog Linux Notes from DarkDuck, which was a finalist in our Best FOSS or Linux Blog competition. In addition, he publishes the site Buy Linux CDs, where you can read more about different Linux operating systems and then order disks with your favorite distribution.

We’re hearing reports that Microsoft is having trouble pushing copies of the whiz-bang don’t-call-it-metro Windows 8 even at reduced fire sale prices, with one tech writer suggesting a Vista-esque rollback to Windows 7. The new Microsoft Surface Pro tablet that was supposed to make Microsoft the new Apple and Steve Ballmer the new Steve Jobs has brought less than enthusiastic reviews. What’s a down on it’s luck technology company to do?

Penguinistas used to worry about the dreaded fork, especially of Linux. “What if Linux forks and becomes like Unix?” was a question often being posed in the open source media. Linus Torvalds would do his best to put those fears to rest, explaining that under the GPL forks are usually to be welcomed.

He was of the opinion that if a fork improves a product and is liked by the users, those changes will almost certainly be rolled back into the originating application. If not, and the fork is indeed a marked improvement on the original, then the fork becomes the standard bearer at the expense of the original application.